Outlaws from the West is the first storyline mission in Red Dead Redemption 2.

Half frozen, close to death, and on the run, the gang find shelter in an old abandoned mining town. Dutch, Arthur, and Micah head out to look for supplies.

Following the failure of the Blackwater Massacre and the Van der Linde gang's subsequent escape into a snowstorm in Ambarino, Arthur and Dutch go scouting for supplies and any sign of Micah or John, who were sent to do the same. They soon encounter Micah, who tells them about a nearby homestead and leads them to it. Arthur hides behind a cattle shed and Micah hides behind a wagon whilst Dutch goes to speak to the people inside the house.

As Dutch is speaking, Micah notices a body in the wagon and alerts Arthur, who says that Dutch should be the main focus. The men in the house, who turn out to be members of the O'Driscoll Boys gang, begin to threaten Dutch, ultimately leading to a shootout between Arthur, Dutch, and Micah against said O'Driscolls.

Once the shootout is over, Dutch tells Arthur to help him search the cabin for supplies. Arthur finds food and ammunition, as well as a photograph of the previous inhabitants of the cabin.

Dutch then tells Arthur to search the barn for anything of use there. Arthur enters the barn and is ambushed by an O'Driscoll. A brawl ensues, which Dutch observes in amusement as Arthur easily subdues his opponent. Once the O'Driscoll is defeated, Dutch tells Arthur to beat information out of him. Once he's talked, Dutch gives Arthur the choice of sparing or killing the O'Driscoll, or can simply knock him unconscious. If the player lets him go, he'll appear in a later mission only to be killed.

There is a Tennessee Walker inside the barn which Arthur must calm. Dutch then tells Arthur to lead the horse to a hitching post outside the house, and that Arthur should keep the horse. A commotion is heard inside the house, caused by Micah taunting a woman, who had been hiding in the cellar. The house is set on fire by a knocked lantern. Dutch disarms Sadie and calms her down. The four then return to the rest of the gang. 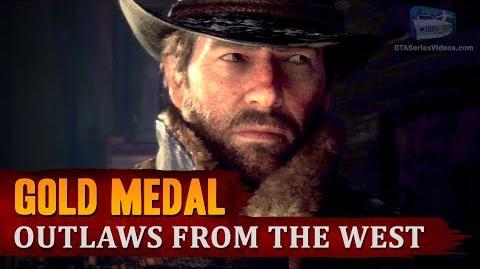 Retrieved from "https://reddead.fandom.com/wiki/Outlaws_from_the_West?oldid=395453"
Community content is available under CC-BY-SA unless otherwise noted.