Paying a Social Call is a mission in Red Dead Redemption 2.

Under the threat of torture, Kieran leads Arthur, John and Bill out to Six Point Cabin where he claims Colm O'Driscoll is holed up.

Arthur confronts Kieran Duffy, who's been tied to a tree in camp, about the O'Driscolls. Bill and Dutch approach, and they decide to threaten Kieran. Dutch orders Bill to "geld" (castrate) Kieran straight away, to which Bill finds some burning hot tongs and prepares to castrate Kieran. Before this can happen, Kieran cracks and finally reveals that Colm is holed up at Six Point Cabin, and offers to take the gang there. Arthur decides to go there, and brings Bill and John (along with Kieran) with him to investigate the supposed O'Driscoll safehouse.

On the journey, Bill tells Arthur that he put some throwing knives into his saddle for Arthur to use, and the player can decide to talk to John or Bill on the way. Upon arrival, they see three O'Driscolls in the forest. One proceeds to urinate on a tree and, while doing so, the player can either dispatch him silently from afar using the bow, sneak up on him with a knife, or send Bill to silently kill him. There will be another two guards, where you and Bill kill one each - again, the player can choose either a ranged kill or to sneak up on them. After either Arthur or John silently kill one more O'Driscoll, a gunfight breaks out between the trio and the O'Driscolls, where the Van der Linde gang members emerge victorious. With the O'Driscolls defeated, Arthur searches the cabin in the hope of finding Colm but, as soon as he enters, a final O'Driscoll jumps him, and knocks him to the ground. Luckily for Arthur, Kieran appears and fatally shoots the O'Driscoll, saving Arthur's life.

Arthur reluctantly thanks Kieran, before realising that Colm isn’t there. He comes to the conclusion that Kieran set them up, and points his gun at him. Kieran quickly points out that he wouldn’t have saved Arthur’s life if this had been the case, and Bill steps in, agreeing with Kieran. Arthur then decides to let Kieran go free, saying that he has done enough to earn his freedom. Unsatisfied, Kieran says that he wouldn’t last long by himself and that it would be as good as killing him, especially with Colm’s men hunting him. After some more convincing, Arthur finally allows Kieran to stay with the gang, and tells Bill and John to take Kieran back to camp, while he searches the chimney in the cabin, after Kieran mentioned that there may be some there. Arthur retrieves the money, as well as a shotgun from above the fireplace.

John and Kieran on horseback

An O'Driscoll about to be executed by Bill Williamson

Two of the O'Driscolls that Arthur and Bill must take out

The Double-barreled Shotgun above the chimney 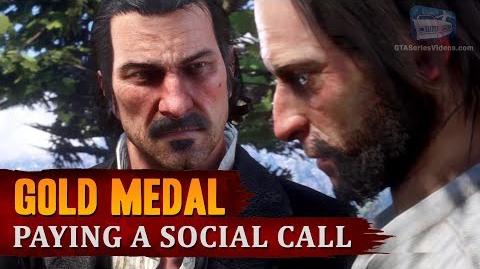