The Pedrosa Brothers are an outlaw gang featured in Red Dead Revolver.

The Pedrosa Brothers are primarily a Mexican gang who caused significant trouble before Red Harlow arrived. Hank Pullman, the train engineer on the Brimstone line, has had significant run-ins with the Pedrosa Brothers. The most notable member is Rico Pedrosa, a Mexican outlaw forced to flee north when the Federales tried to take him down, and he has been preying on the trains ever since.

Only Roberto actually appears in the missions, but Rico is available as a playable character in Showdown Mode. He shares Captain Bufias' quotes.

Rico Pedrosa can be unlocked as a playable character in Showdown Mode by completing the mission "Railroaded" with an Excellent rating. He can also be unlocked by purchasing the Woman Photo from the General Store in Brimstone after "Railroaded". The photo in question is of Rico's sister, who's murder fuels his thirst for vengeance.

Rico Pedrosa is listed in Sheriff Bartlett's Journal on pages 162 - 163 under the Wanted - Dead or Alive section. The pages are unlocked by unlocking his showdown character via either of the methods noted above.

Roberto Pedrosa is listed in Sheriff Bartlett's Journal on pages 164 - 165 under the Wanted - Dead or Alive section. 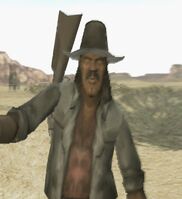 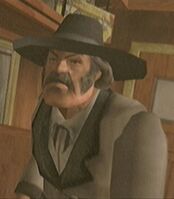 Retrieved from "https://reddead.fandom.com/wiki/Pedrosa_Brothers?oldid=393139"
Community content is available under CC-BY-SA unless otherwise noted.