Penelope was born in an unknown year to the Braithwaite family. Sometime before the year 1899, she fell in love with Beau Gray from the rival Gray family and became an activist for the women's suffrage movement.

Penelope is first seen sitting in the gazebo in the Braithwaite Manor grounds, when Arthur delivers a letter to her from Beau. After receiving it, she expresses her happiness at receiving the letter and how she loves Beau. She then sends Arthur a letter of her own to give to Beau.

When Beau reads her letter, he grows alarmed as it says that she is planning to participate in a rally organized by Olive Calhoon for the suffrage movement, in a town which is deeply hostile to the movement. Beau asks Arthur to accompany him and convince Penelope to not participate. After arriving at the stagecoach that the suffragists will be riding in, they ask Penelope to leave with them, but she is insistent on being part of the march. Penelope then compromises with Beau by having Arthur driving the carriage through town in order to protect her and the suffragists. Upon the suffragists' arrival to the Bank of Rhodes, Penelope asks Arthur to help Beau, who is being harassed by his cousins, Iain and Scott Gray. Before anything can escalate, Arthur brings Beau to safety.

Penelope will next be heard from when she sends a letter to Arthur. She informs him that she is being kept in a cabin behind the ruins of Braithwaite Manor, and she needs his help. After arriving, Penelope tells Arthur that she has been locked up for her role in the women's suffrage movement, and either her family or the Grays killed the suffrage leader, Olive Calhoon. Penelope then goes on to tell him that she and Beau are planning on moving to Boston, and that Beau is waiting for her at the train station. However, she cannot go alone, due to the considerable threat the Braithwaites and the Grays pose to their plan, and so she needs Arthur to take her.

Arthur agrees to bring her to the station, where she reunites with Beau. Arthur purchases the train tickets, although it soon turns ugly when Iain and Scott approach them and attempt to pull Beau away. Arthur steps in and knocks both of them unconscious in a brawl. The three then hurry onto the train and set off. However, they are then pursued on horseback by Penelope's cousins, who are unwilling to allow her to elope with a Gray and have the family's jewelry. Arthur fights them off, but the train's driver abandons the locomotive out of fear, resulting in Arthur driving the train to Riggs Station in his stead. After stepping off the train, Penelope offers Arthur a sapphire bracelet as payment, which can be refused in exchange for honor gain. Arthur then helps the couple into a carriage, tells the driver to head for Boston, before taking his gun and giving it Penelope. The trio say their goodbyes as the carriage rolls away and she is not seen again.

Penelope is a slender young woman, with blue eyes, blonde hair and braids. Penelope usually wears a long white and blue patterned dress with a big blue bow, a blue bow on her hair and black boots.

During her escape with Beau, Penelope wears a black top hat with a long dark blue ribbon, a blue elegant suit with a long skirt of the same color with dark blue stripes at the end, a white blouse with a dark blue bow tie, a white gloves, and long white patterned boots.

Penelope in the Braithwaite Manor grounds

Penelope during her escape with Beau 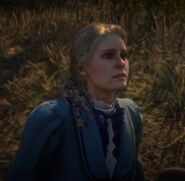 Penelope without her hat