Perdido (Spanish for Lost) is a constituent region of the Nuevo Paraíso territory. It is the central region of the territory and borders the regions of Diez Coronas to the East, and Punta Orgullo to the West. The San Luis River forms the northern border of the region.

Perdido is populated with very few towns and settlements, with Chuparosa and Las Hermanas being the main exceptions. The region probably had a greater population before the civil war, and seems to have served a good place for ranchers, but the people that lived there either fled the area or were killed. By traveling through the area, the aftermath of the civil war can be seen; the area has many ruins left from old buildings and destroyed and abandoned ranches, such as Rancho Polvo, Primera Quebrada etc. which are scattered all over Perdido.

Since Perdido is more or less a non-populated part of Nuevo Paraiso, the ruins from buildings serves good use for bandits on the run and this might be the reason why most people avoid this part of Nuevo Paraiso. The people that nowadays can be seen there are travelers and hunters making their way along the roads or bandits hiding out or getting into firefights with the law. 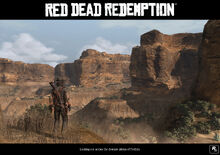 Looking out across the desolate plains of Perdido 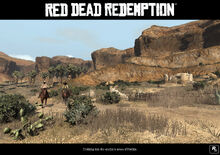 Trekking into the southern areas of Perdido
Add a photo to this gallery
Retrieved from "https://reddead.fandom.com/wiki/Perdido?oldid=383596"
Community content is available under CC-BY-SA unless otherwise noted.