This criminal circus gang was created during the period of Revolver by Perry after he murdered Prestor O'Leary, the sane leader of the circus, back when it wasn't full of deranged freaks.

The circus was presumed to have dealt with criminal activities.

One of their main hideouts were the Fairgrounds and Widow's Patch which they ran after the death of the Ugly Gang.

Perry's circus is first encountered during the mission "Carnival Life", where Red Harlow first meet Jack Swift, a sharpshooter who denied the offer to join the circus and both men are attacked Pig Josh and the circus. Once all of his gang lies dead, Josh himself makes an entrance and takes matters in his own hands as he jumps from his box-cart and starts to attack Red and Jack using nothing but dynamite, he was the circus' demolition expert after all. Red kills Pig Josh and Jack runs off to Widow's Patch to end Perry and his circus once and for all.

In the mission "Freak Show", the leader of this psycho circus, Professor Perry himself, shows up in Swift's face. His best and supernatural ability was his Snake Oil elixir that allowed him to teleport and regenerate his health despite being shot at by Jack. When Perry's clowns, Asada, Atlas Jones, presumably Fidgit, and the rest of the gang were killed off, Jack saved the captured Katie O'Grady.

The circus possibly disbands after this, as they lost their hideouts, their leader and most of their members. 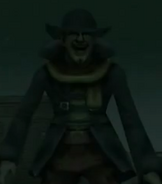 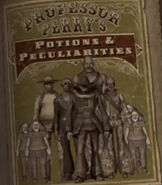 Most members of Perry's circus in Bartlett's journal.
Add a photo to this gallery
Retrieved from "https://reddead.fandom.com/wiki/Perry%27s_Circus?oldid=398648"
Community content is available under CC-BY-SA unless otherwise noted.