Perry Rose is a minor character and a bounty target featured in Red Dead Redemption.

Perry is a member of Walton's gang. He is wanted for assault and can be captured or killed depending on the player's choice.

Perry can most often be found around Armadillo, frequently loitering inside the saloon. However, he can sometimes be found playing Horseshoes at Rathskeller Fork or sitting in the telegram office. He can also be encountered at the Twin Rocks gang hideout, where he, along with Alfie Scruggs, is on top of one the rocks, but he will be hostile.

Perry is one of two of the Walton's who leads the "Wild Posse" random encounter, where he drags a civilian NPC alongside three other Walton's through Armadillo and beyond.

An undead Perry can be seen on the right. 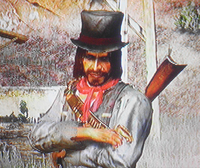 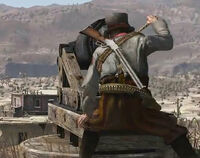 Perry Rose using a Cannon.
Add a photo to this gallery

Retrieved from "https://reddead.fandom.com/wiki/Perry_Rose?oldid=382920"
Community content is available under CC-BY-SA unless otherwise noted.