Philip Carlier was the mild-mannered chief clerk of the Castille Cotton Company, based in Saint Denis. When, in 1896, a fellow employee caught him embezzling on the job, Carlier reacted furiously and bludgeoned him to death. On the run from the law, he went into hiding in the swamps of Lagras. Eventually, he lost his mind due to isolation, poor living conditions, and dissociative drugs consumption. He sympathized with the Night Folk.

During the bounty mission, the player tracks him down to a location near Lagras, where he may be killed or captured for a reward. 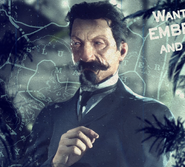