Near the San Luis River in Perdido, Nuevo Paraíso

Phillip Ross is a minor character featured in Red Dead Redemption. He appears in the Stranger side-mission "Remember My Family".

Phillip Ross is the brother of Edgar Ross. In 1914, Phillip was out duck hunting with Edgar after he had retired from the Bureau of Investigation.

At his camp, Phillip comes across Jack Marston. The two share a conversation where Phillip says that he caught some rabbits, coyotes, and elk while hunting, after which Jack states that he’s looking for Edgar Ross in order to deliver a letter to him. Phillip tells him that Edgar is has gone duck hunting and can be found by the riverbank nearby. Phillip subsequently warns Jack of his brother's "filthy temper" before Jack goes to confront Edgar.

Afterward, Phillip can be killed without failing the mission. However, the player will lose Honor unless they have the bandana equipped. 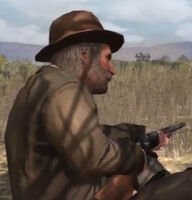 Retrieved from "https://reddead.fandom.com/wiki/Phillip_Ross?oldid=391727"
Community content is available under CC-BY-SA unless otherwise noted.