Phineas T. Ramsbottom is a minor character in Red Dead Redemption 2. He initiates the stranger side-mission "Smoking and other Hobbies".

Phineas can be found sitting on a bench outside of Flatneck Station, smoking beside an open box. He calls the player over and explains to them that he has a hobby of collecting Cigarette Cards: cards either found in cigarette packs or around the in-game world, which become very valuable once a set is completed.

He asks the player to search for these cards, and if they complete a collection, they should mail them to Phineas for a cash reward.

Phineas is a white middle-aged man who is very well-dressed. He has dark hair and sports a chin strap beard.

He wears a black bowler hat with a red ribbon around it, and a grey overcoat with a white shirt underneath. He wears a red bandana tied around his neck and has black pants and shoes. 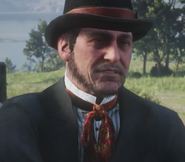 Phineas during the cutscene

Phineas T. Ramsbottom can be seen on the train after completing the mission

Phineas T. Ramsbottom will be standing still if the mission becomes unavailable 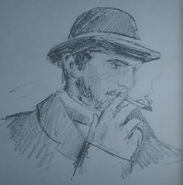 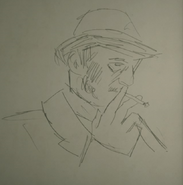