The Pinkerton National Detective Agency is a private security and detective agency, and a major antagonistic faction featured in Red Dead Redemption 2.

The Pinkertons are private agents often hired by the U.S. government and private companies for security and detective work, founded by Allan Pinkerton in 1850. In the West, they have their sights set on bringing down outlaw gangs. After one of Leviticus Cornwall's trains was robbed by the Van der Linde gang, the businessman commissioned the Pinkerton National Detective Agency to hunt them down and bring them to justice.

It is known that Pinkertons were present during the Blackwater Massacre in 1899, and were possibly responsible for killing Davey Callander and Jenny Kirk. They would spend the rest of the year chasing after the Van der Linde gang.

A high-ranking Pinkerton, Agent Milton and his subordinate, Agent Ross, encounter Arthur Morgan on the bank of a river. They offer him a deal where, in exchange for turning Dutch in, he will be spared execution. Milton also reveals that he killed Mac Callander, before leaving with Ross.

At some point, the outlaw Colm O'Driscoll does a deal with the Pinkertons, which involves him handing over the Van der Linde gang. He captures Arthur, with the hope of leading Dutch van der Linde to him, although this plan is foiled when Arthur manages to escape.

The Pinkertons eventually manage to trace the gang to Clemens Point. Milton and Ross offer the whole gang their freedom if they bring in Dutch, although the gang refuse and warn the pair to leave. Flustered, Milton warns them that he will be back with fifty men, and the gang are forced to relocate.

Later, the Pinkertons find out about the Saint Denis bank robbery. Hosea Matthews is captured while orchestrating a distraction, and held hostage by Agent Milton outside of Lemoyne National Bank. Realising that Hosea had not and would not agree to his deal, Milton kills Hosea with a shot to the chest, initiating a shootout between Pinkertons and the Van der Linde gang. During the shootout, the gang realise that it is unwinnable, and that they need to escape. They manage to escape onto the rooftops, although John Marston is arrested and Lenny Summers is killed by two Pinkertons during the escape. The gang manage to hide in an abandoned apartment, before five of them (Dutch, Arthur, Micah, Bill and Javier) escape to Guarma.

At some point after the five return from Guarma, Micah Bell becomes an informant for the Pinkertons. It is unknown whether he was arrested and forced to either become an informant or face execution, or whether he decided to agree with Milton's deal and be offered freedom in exchange for turning Dutch in. Either way, his information almost certainly leads the Pinkertons to Lakay, where they attack the gang. Despite Milton's best efforts, the attack is repelled.

The two Pinkerton agents Milton and Ross are seen soon after in Annesburg, coming out of meeting with their financial backer, Leviticus Cornwall. He berates the two for their lack of progress, although Milton’s insists that they are “very close”, but this is disregarded by Cornwall. The two Pinkertons then leave. Given how Cornwall was killed minutes after this, it is likely that the Pinkerton National Detective Agency stopped receiving financial backing from him.

While the Van der Linde gang are robbing a train, Agent Milton and the Pinkertons manage to capture Abigail and take her to Van Horn where she is to be put on a boat and tried for murder. Upon hearing about this, most of the gang brush it off, leaving only two gang members, Arthur and Sadie Adler, to go after Milton themselves. They go to Van Horn, where Arthur takes up a position on the lighthouse to be a sniper, while Sadie makes her way to Milton's base, with Arthur covering her. When she reaches Milton, however, she is captured, prompting Arthur to go after her, while he slays several Pinkertons on the way. He reaches Milton's base, and begins to free Abigail, before being held at gunpoint by Milton. The agent reveals that Micah is the rat, before Arthur attacks him. Arthur is, however, weak from his Tuberculosis, and being overpowered, before Abigail manages to break free and shoot Milton in the temple with Sadie's revolver. The three then ride away, with Pinkertons chasing them.

After Arthur goes to Beaver Hollow to confront Micah, Pinkertons, now led by Agent Ross, attack the gang during the standoff. They chase Arthur and John into the caves, although the two manage to escape into the woods, only to be pursued by Dutch and the others, who fail to catch the pair due to the fact that they are also being attacked by Pinkertons. At some point during their escape, both Arthur and John have their horses shot from under them, before killing the Pinkertons that attack them. Whether Arthur goes back to Beaver Hollow for the money or helps John escape, the Pinkertons fail to catch any members of the Van der Linde gang.

In Red Dead Redemption 2, Pinkerton agents are rarely seen during free roam and only appear in certain missions, although the majority of agents are around West Elizabeth during Chapters 1 through to 6 when playing as Arthur Morgan, specifically around Great Plains and around Tall Trees. This bars players from attempting to explore Great Plains, Tall Trees and New Austin (despite the fact players will automatically be killed by unseen snipers when approaching New Austin), and officers will hunt down Morgan should he remain in the aforementioned areas. 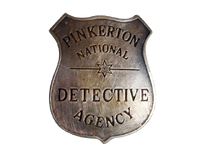 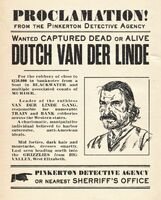 Pinkertons spawn outside of map near Nekoti Rock

Pinkertons will spawn between Great Plains and Tall Trees 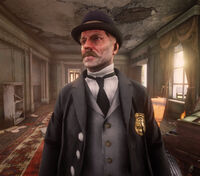