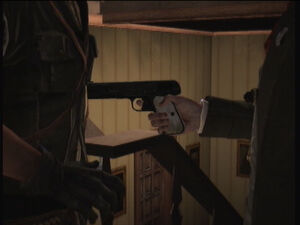 In Red Dead Redemption, pistols share the top slot of the weapon wheel with Revolvers. Pistols are powerful at short range, delivering a heavier punch than Revolvers in addition to having a greater ammo capacity. They also tend to have a shorter reload time than a Revolver, requiring only one new magazine rather than multiple separate rounds. Pistols use Pistol Ammo, which is harder to find and more expensive than Revolver Ammo in the early part of the game.

Redemption 2 and Online share the same set of pistols, although the unique Midnight's Pistol is only available in Redemption 2. Similarly to Redemption, pistols have a high ammo capacity compared to revolvers, often having faster reload time and a quicker rate of fire too, with lower damage and accuracy (the Volcanic Pistol is a notable exception to this). Pistols use various types of Pistol Cartridges.

Pistols do not appear in Red Dead Revolver.