Pleasance is an abandoned settlement and point of interest in Red Dead Redemption 2 and Red Dead Online in the Scarlett Meadows region of the State of Lemoyne. The name can be seen as ironic, due to the abnormal number of unpleasant events that took place there.

The town of Pleasance was founded in August 1883 and was abandoned a month later following a brutal massacre that claimed the lives of ten residents. By 1899, it has become a ghost town surrounded by an enduring mystery.

On September 17th 1883, Pleasance was the site of a grisly massacre that claimed the lives of ten locals. The victims were discovered either shot or stabbed in a violent manner.

The killer, or killers as the case may be, was never identified deepening the mystery surrounding the ill-fated town. The motive for the murders also remains unknown but graffiti is seen scrawled on many of the buildings.

There is also evidence that Pleasance was also struck by plague. Many buildings are boarded-up and inaccessible, with signs such as "STAY OUT PLAGUE" being written on buildings, presumably as a warning not to enter in order to preserve the victims' quarantine. The easternmost house of the town also has graffiti scrawled across it; the first inscription reads "UNCLEAN SINNERS" on the wall, partially obscured by a creeping vine, while the door is scribbled "ILL WITH SINS".

In addition to this, the Pleasance schoolhouse appears to have fallen victim to not only fire, but a large tree that fell on the building at some point afterwards (as can be assumed by the lack of scorch marks on the tree). The schoolhouse was the only building in addition to one other that was struck by the fire.

It can also be observed that the town church has no cross. It is possible that the town worshipped Satan, and the series of misfortunes that befell the ironically-named Pleasance are intended a result of this.

The only graves in the town churchyard are from the ten victims of the massacre, all of them registering a violent death. Their gravestones are written as follows: 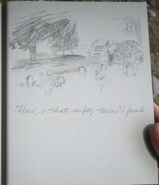 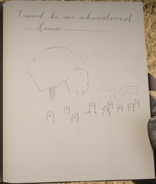 John's drawing: "I went to an abandoned town."