View source
watch 00:55
The Use of Poker in Red Dead Redemption
Do you like this video?
Play Sound 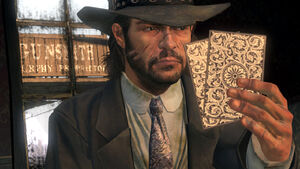 The player can participate in games of poker throughout the game world. Poker is often used as a money-making method, but the process is a risk as you can either lose or earn considerable sums of cash. Saloons prominently feature poker tables.

The poker rules used in-game are those from no-limit Texas Hold 'Em. You should have at least a passing understanding of the rules as the game does not tell you all of the information on a winning hand, only the primary information. Winning hands (in order from worst to best) are as follows: High card, 1 pair, 2 pairs, 3 of a kind, straight (five cards in sequence such as 9-10-Jack-Queen-King), flush (5 of one suit), full house (three of a kind plus a pair), four of a kind, straight flush (5 sequential cards of the same suit), royal flush (as with straight flush but 10, Jack, Queen, King, Ace).

Players may use any combination of the two cards they hold and the five community cards to form the best five-card hand. The nature of community-card poker games greatly increases the chance of two or more players each having strong hands, thus increasing the level of action (betting).

The High Stakes Poker game is the most expensive gambling activity, requiring $250 to sit in. This is more than double Blackwater's normal Poker Table below the Safe House. The player cannot wear the Elegant Suit to the game, so cheating is not possible; the player must wear the Gentleman's Attire in order to access the game. Starting with a full table, it is possible to make $1250 dollars in one sitting. The player must first unlock West Elizabeth before being able to reach the location of the game. Once unlocked, the player must go to Blackwater and head to the Blackwater Hotel.

In the mission "A Fine Night of Debauchery", Arthur Morgan goes undercover to as an oil man to rob Desmond Blythe during a poker tournament that is being held on the Grand Korrigan riverboat.

After the blinds are contributed, players are free to bet any amount between the minimum bet (Call), higher than the minimum bet (Raise) and their maximum available chips (All in). The player can also Fold, which in the player does not take part in the betting until the hand is over; this is useful if the player thinks that their cards are not sufficient enough to win the hand and can save them money.

At any point, the player may quit the game and cash in their chips.

Marston can cheat while playing poker in Red Dead Redemption, if wearing the Elegant Suit. When dealing, the player must control an arrow with the analog stick in the middle of a small arc. If it strays too far from the center it begins to turn red, indicating that other players are beginning to notice the underhanded tactics. If it is completed successfully, a random card from the bottom of the deck is retrieved. Failure will result in a duel.

Marston then holds this extra card (shown separately on the left side of the screen) in an unknown location on his suit, likely in the sleeve. At any time when the player is betting, he can attempt to exchange this card for one in his hand. This uses the same analog balance curve as the initial cheating draw, though it is slightly easier to stay in the middle than when dealing. The cheat card then goes into the hand and the card that was chosen to be replaced then goes into the reserve.

Only one card can be stored at any given time and the reserve card is randomly reset if the player chooses to cheat while dealing later in the game. This opens up possible strategies such as exchanging your reserve card for a card that you feel is superior from your hand, especially if you are planning to fold or your strategy did not play out in the flop.

Note: The higher the buy-in, the higher the probability to be detected by other players (i.e. it is easy to cheat at the MacFarlane's Ranch, but much harder at Blackwater). The more NPC players are in the game, the less likely they'll spot Marston cheating even if the player is a bit sloppy during the cheat centering.

In multiplayer, Poker games can be joined either by launching a game from one of the map markers or by selecting the Poker playlist from the multiplayer menu. Poker games take place in a separate game session outside of Free Roam. Cheating is not available in multiplayer poker.

Poker is available in Red Dead Online, and, like in the first game's multiplayer, cheating is not possible.

In single player, there is a Social Club Challenge associated with the high stakes poker game at the Blackwater Hotel.

This cheat allows the player to take out enemies with a single punch.

In multiplayer, there are two Multiplayer Challenges associated with Poker, under the Gambling section. Each challenge has five ranks.

John Marston playing a game of poker in his Gentleman's Attire. 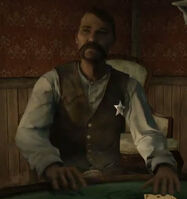 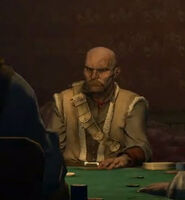 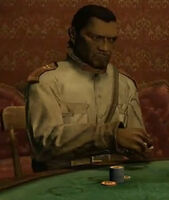 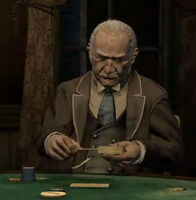 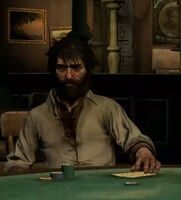 The player can participate in a game of Poker to obtain the following Trophies/Achievements: