In search of new leads for the gang, Karen, Tilly and Mary-Beth convince Arthur and Uncle to ride out to Valentine with them.

Arthur wakes Uncle up in camp while he's sleeping. After pointing out Uncle's constant laziness, Arthur tells him to get in the wagon as they need to get some things in Valentine. Karen, Tilly, and Mary-Beth convince Arthur to let them go as well. As they near Valentine, the group encounter a man whose wagon has broken down. Arthur can either help him get his horse back from nearby, send Tilly to do it, or refrain entirely; helping the man results in a small Honor boost, while refusing results in a small loss. Once they resume the ride, they reach Valentine, where the women explore the town in order to find any leads, while Arthur and Uncle buy supplies from the store and relax outside with a bottle of whiskey, before Arthur dozes off.

Afterward, Arthur is awakened by Mary-Beth, who tells Arthur of a train they can rob. Arthur then notices Tilly is being harassed by a man across the street. After sternly warning the man to leave, Arthur enters the Saints Hotel to find Karen. He finds her having been hit by a man she was attempting to steal from, who Arthur then takes care of. After the group meets outside, someone asks Arthur if he was in Blackwater, as part of the failed ferry robbery. Arthur denies it, but the man doesn't believe him and rides off. Arthur steals a horse from a resident in the town and chases after the man until he is bucked off his horse and hanging on a cliff. Arthur can choose to either save him or kill him. If he is saved, the man says that his name is Jimmy Brooks and thanks Arthur, who admits that he was in Blackwater recently. As thanks, Brooks gives Arthur a pen and rides away; the player will gain a significant amount of Honor accordingly. Alternatively, the player can stamp on his hand and cause Brooks to fall to his death, causing a substantial loss of Honor.

After completion of the mission, the player may return the horse to its owner in Valentine for a small gain in Honor.

Unique train seen during the mission

Jimmy Brooks hanging on a cliff 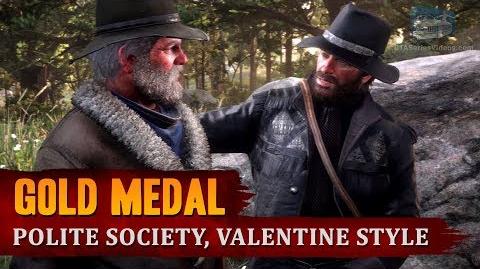