Political Realities in Armadillo/dialogues
“What are you doing here, Mr. Marston, apart from frightening my deputies?”

Political Realities in Armadillo is the eighth mission in Red Dead Redemption.

John enters the Sheriff's Office where he sees deputy Jonah sleeping in an open jail bed and another prisoner in a locked jail cell. The prisoner sees Marston and wakes Jonah, saying he has company. Jonah stands up and asks why he has come, and John, thinking that Jonah is Marshal Leigh Johnson, says he's from Fort Mercer. Suspecting he is one of Bill Williamson's goons, Jonah pulls out his gun, but John pulls out his gun too and says he should calm down, and at the same time the real Leigh Johnson comes in. Marston says he wants to capture or kill Bill Williamson. Leigh says that would be very hard, as it's already tough enough for him to keep Armadillo safe. John then offers to help him with some goons hanging out at the saloon.

Walk with Marshal Johnson to the saloon on the south end of town. Here a cutscene will begin and Walton Lowe will get on his horse and ride off, which means John will also have to mount a horse and follow. Inevitably, Walton will see Marston and he is prompted to tail him to his hideout. Hold your acceleration button to maintain the Marshal's speed and ride along with him. Eventually, you will arrive at the hideout, where Walton is holed up with some of his goons. Take cover behind the rock and proceed uphill to the broken wagon, taking more cover. A gangster will pop up from ahead, shooting. Take him out and proceed further, taking cover behind the crates. Two goons will be defending here (one behind the outhouse and one on the far end of the shack). Use Dead Eye or take them out normally. Move up to cover behind the outhouse and kill the final goon hiding on the rear end of the house. Get to the front of the house and enter Dead Eye (unless you're a quick shot). Walton will storm out of the house attempting to kill the player. He must be shot in the leg and he will fall to the ground, and there will be a cutscene in which Johnson thanks Marston. Alternatively, you can shoot Walton in a killzone to put him down for good, but this will not do well for your honor.

After the mission, the game will hint to you that the Marshal left you a long way from home and that you can use your campsite to fast travel back to Armadillo/MacFarlane's Ranch. After looting the bodies and checking the footlocker inside the shack, either get on your horse and ride back to town or use [Back](Xbox) or [Select](PS3) and go to Kit, then select Basic Campsite, select "Travel to destination" and then a town. Marston will kick dirt on the fire and you'll be teleported back to town.

"I got me one of them idiots who give marshals a bad name..."

Marston talks with the Marshal
Add a photo to this gallery 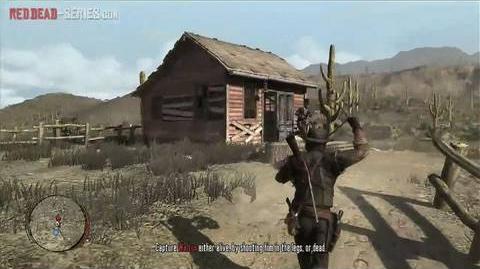 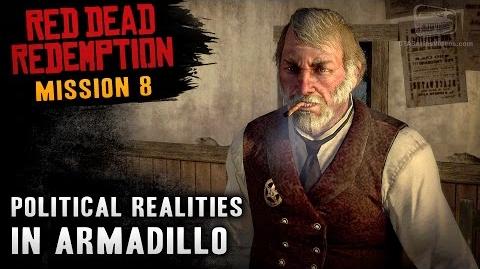 Retrieved from "https://reddead.fandom.com/wiki/Political_Realities_in_Armadillo?oldid=417606"
Community content is available under CC-BY-SA unless otherwise noted.