Pouring Forth IV is a mission in Red Dead Redemption 2.

Blocking the tracks with the heavy oil wagon, Arthur, John, Charles and Sean board the train and rob valuables from the rich passengers and baggage car.

Arthur arrives at the stolen oil wagon and finds that Sean is already there. The two wait for John and Charles. Once they've arrived, the gang waits until nightfall, then drives to a railroad crossing on the state line between New Hanover and Lemoyne. Arthur parks the wagon on the tracks and unhitches the horses, while the other three wait and hide. Arthur stands on top of the wagon, and forces the train to stop. The group storm the train, and rob the passengers. Eventually, lawmen arrive and order the gang to surrender. They fire on the lawmen, who return fire. After a short firefight, Arthur and the gang get on their horses and ride away. After escaping the lawmen, the four split the take and split up, agreeing to meet back at camp. 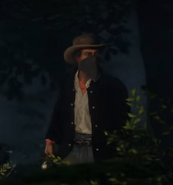 Lenny in the Trailer #2.