Prairie Poppies are little yellow flowers on top of tiny green bushes. They are very easy to miss anytime, though chances of spotting them are better throughout the day when the sun is high. It makes the green really pop out in the sea of brown that is the Great Plains.

The Prairie Poppy can be identified by the long stems and golden yellow cup-shaped flowers. The bright color of the flowers can be easily spotted against the dusty ground in the plains. This plant is native to Great Plains, West Elizabeth, and can often be found growing near train tracks. This type of poppy is one of the key ingredients in Snake Oil, though it can also be consumed by itself to increase your Dead Eye Core. [1]

They are a type of plant that the player can harvest and sell to merchants for money.

Prairie Poppy can be used by the player to create other valuable and useful items such as medicines and for Undead bait.

They are scattered around the eastern and south sides of the Great Plains, particularly on the southern side of the railroad tracks. They are in especially great abundance along the telegraph poles/wires running north-south past Broken Tree and the road that runs through the words "Broken Tree" on the map.

Prairie Poppy can also be found in the southeastern part of Cholla Springs, New Austin. 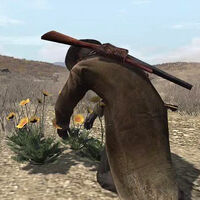 Gathering plants and flowers contributes toward the following trophies/achievements:

Gathering these flowers contributes to this trophy/achievement:

Retrieved from "https://reddead.fandom.com/wiki/Prairie_Poppy?oldid=420112"
Community content is available under CC-BY-SA unless otherwise noted.