Preaching Forgiveness as He Went is a mission in Red Dead Redemption 2.

Following a lead about the Lemoyne Raiders sitting on a pile of weapons, Lenny and Arthur ride out deep into the woods towards Shady Belle.

Lenny calls over Arthur in camp, telling him that he has heard of a manor deep in the woods used by a gang called by the Lemoyne Raiders. Lenny explains that they are ex-confederates who still want an army and, in order to fund it, they have a huge stockpile of weapons at their hideout, which they can sell to finance their operations. With finding some weapons guaranteed and the possibility of getting money on top of that, Arthur agrees to investigate the manor with Lenny, and the two depart from camp.

Upon arrival, Arthur and Lenny take their horses into the woods, while Arthur takes out a scoped rifle to survey the manor. After analyzing the explosives, guards, and layout of the place, Arthur suggests that Lenny could go in and act “friendly” with the Lemoyne Raiders in order to distract them. The player can decide whether to do this or simply shoot a large box of dynamite in the hideout, killing some of the Lemoyne Raiders. Either way, a large firefight breaks out between Arthur and Lenny against the Raiders, with the pair emerging victorious. With their enemies dealt with, Arthur and Lenny find a cart with a stash of weapons in the back and decide to take it back to camp.

Soon after they leave the woods, three Lemoyne Raiders spot them stealing their wagon and threaten them, only to be gunned down by Arthur and Lenny, who continue. Arthur praises Lenny's abilities and says that tells him that the more senior gang members look favorably on him. The pair eventually reach camp and Arthur takes out a rifle from the stash as his own, before he and Lenny thank each other for the heist. 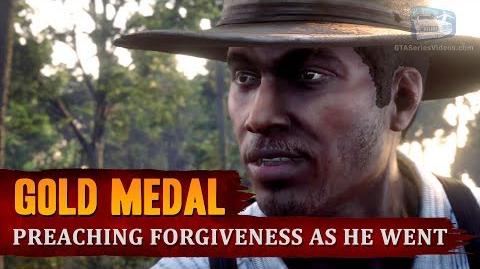 Retrieved from "https://reddead.fandom.com/wiki/Preaching_Forgiveness_as_He_Went?oldid=410860"
Community content is available under CC-BY-SA unless otherwise noted.