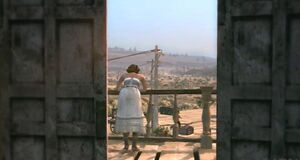 In Red Dead Revolver, a number of prostitutes (referred to in-game as showgirls or waitresses) appear in the saloon in Brimstone throughout the game. They also serve as prostitutes, based on their dialog. The player can talk with these showgirls between missions.

Christina, Cheryl-Lynn, and Tameri are three of the showgirls who have pages in Sheriff Bartlett's Journal. Christina is also available as a playable character in Showdown Mode. Megan, Tammy, and Rachel are three showgirls who the player needs to protect during the mission "Saloon Fight".

The boss of the mission "Rogue Valley", Bad Bessie, was a former showgirl at the saloon, renowned for the things she could do with a whip.

In Red Dead Redemption, prostitutes (also referred to in-game as courtesans, whores, and hookers) can be found in and around the saloons or the brothels in most of the towns, most commonly at Thieves' Landing. Although the prostitutes will make advances to Marston, the player does not have the option of hiring the prostitutes.

Saving a prostitute in Red Dead Redemption can be rewarded with money, Fame, as well as Honor.

Prostitutes can be found in the DLC Undead Nightmare as normal undead, Bolters, survivors and can be seen in random encounters, in need of a doctor due to the zombie infection or they may need a lift to the nearest town. A couple of prostitute survivors can be seen in Armadillo, stating that the cause of the plague was because of their "whoring" and will randomly talk dirty to the player when approached. A prostitute is also one of the Missing Persons. Also, sometimes they will still use their normal greeting and John Marston will respond as usual.

In Multiplayer a zombie resembling a prostitute, Sarah Reese, can be chosen to play as through the Undead category of the Outfitter.

Prostitutes appear in most saloons later in the day, with the exception of those in Saint Denis, which are present around the clock. The player can interact with prostitutes but can only decline or reject when they make advances towards him. In hotels, players can hire prostitutes to give the protagonist a massage while in the bath, for a price of $0.50.

Eva Cortes from the Stranger Side-mission "Eva in Peril".