Montemayor was a young man in the employ of Captain Vincente De Santa as a waiter in Escalera, at Colonel Allende's mansion.

It was heavily implied that Montemayor shared a sexual relationship with De Santa, as seen by their interactions in cutscenes and the dialogue between Marston and other characters.

Quique can be seen serving De Santa drinks in the introduction of several missions, or helping De Santa bring girls to Allende. Montemayor likely met the same fate as his employers, execution or imprisonment by Reyes' Rebels. 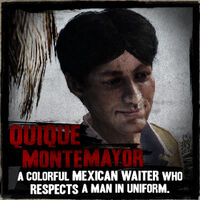