Rafael is a member of the Federales.

Rafael is the federal who initiates the Tesoro Azul gang hideout. He asks Marston to help him rid the town of Banditos and to rescue his colleague, Francisco Aragon, whom the Banditos are holding hostage.

Rafael can most often be found in Chuparosa, outside the Mayor's Office. He can also be found playing Five Finger Fillet in Torquemada. However, if Marston has a bounty, Rafael will become hostile and attack him. He can also be seen in the mission The Mexican Wagon Train where he will be the convoy driver, he will be hostile.

In Undead Nightmare, Rafael can be found defending El Matadero where he is on the roof of the house with the Maxim Gun, If the settlement is saved and Rafael survives, he will stay on the roof.

He may also spawn on the opposite building along with a Chinese worker. 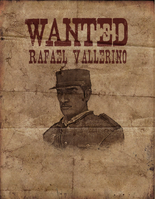 Rafael's wanted poster
Add a photo to this gallery

Retrieved from "https://reddead.fandom.com/wiki/Rafael_Vallerino?oldid=382934"
Community content is available under CC-BY-SA unless otherwise noted.