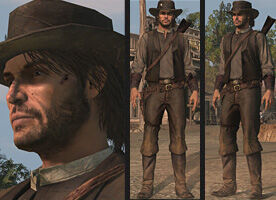 The Rancher Clothing is an outfit found in Red Dead Redemption and Undead Nightmare.

At the end of the mission "And The Truth Will Set You Free", Marston's default clothing becomes the Rancher Clothing. For several major gameplay missions, Marston cannot change his outfit in any safehouse or camp. The player will not be able to change outfits again until completing the mission "The Last Enemy That Shall Be Destroyed".

It can be obtained after completing the mission "The Outlaw's Return". It can be found on the Marston Ranch at Beecher's Hope in Great Plains, West Elizabeth.

In Undead Nightmare it is obtained at the start of the game and is seen briefly at the beginning of Love in the Time of Plague. 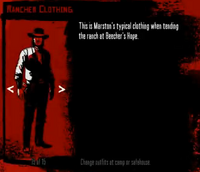 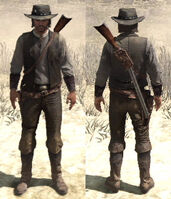 Obtaining the Rancher Outfit will contribute toward acquisition of the following Achievement/Trophy:

Retrieved from "https://reddead.fandom.com/wiki/Rancher_Outfit?oldid=400696"
Community content is available under CC-BY-SA unless otherwise noted.