Randall Forrester is a minor character and Stranger featured in Red Dead Redemption. He is featured in the Stranger side-mission "American Appetites".

Forrester is a cannibal who devours his victims in the hills in near Hanging Rock.

Forrester is the man who has been kidnapping residents of Cholla Springs and eating them. When Marston encounters him, his leg is already broken by his latest victim, and he tells Marston to catch the man who did it. Upon capturing the man, it becomes apparent Forrester wishes to eat the man. The player can choose to kill or subdue Forrester, or otherwise leave him to eat the man. 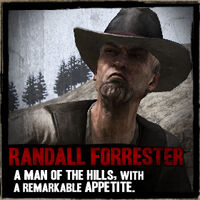