Range War is a mission in Red Dead Revolver.

Returning to Sheriff Bartlett's office after claiming the last bounty in the territory, Red is told that the Sheriff is unable to pay him due to the money not having arrived at the bank yet. Red heads over to speak with the manager, and finds Annie Stoakes pleading with him to give her a little more time to pay off the debt she owes on her lands. When the manager refuses, Annie storms out and heads back to her home, while Red threatens the official to give him his money upon Red's return.

Once the cutscene has ended, the player will be in control of Annie Stoakes at her ranch. She is armed with a knife and her special rifle Faith. Instead of Dead Eye Targeting, Annie's rifle has a special explosive attack which is performed with the R2 button and which can come in handy during the mission. Two outlaws, Gilbert and Dirk, are riding on horseback wielding torches. Eliminate them, making sure to stay out of the way of their mounts.

Once this is done, shoot the locks on all of the stable doors to free the animals. The player must take care, as the frightened livestock will charge out of their pens, knocking Annie down and taking away a portion of her health. There are also a few outlaws up in the lofts and a couple who will charge out of empty cattle pens once the locks are shot. Twiggy Phelps is among these.

Once all the animals are safe, a cutscene will show four more bandits approaching from the ranch's entrance, including Gordon "Digs" Fowler and Udo Kang. Eliminate them, then head over to the edge of the farm (the direction will be shown in a brief cutscene) and take out the waves of advancing enemies.

When they are finally dead, Holstein Hal and his brother Longhorn Luke (whose health bar is labeled "Buff"), will ride up on Buffalos and begin attacking. The player will be able to mount a bull and ride after them, although this is somewhat tricky, as it is difficult to shoot while mounted. If on foot, the player must keep their distance from the two men, as Holstein Hal uses a lasso to drag the player, and his accomplice has a long range rifle. The duo can also cause nearby bulls to stampede, posing another threat to Annie.

After the brothers are killed, a final cutscene will show Red approaching the ranch. Annie will explain her plight to him, and he will give her the bounty money intended for himself before heading back towards town. After this, the mission is completed.

The player will fail the mission if:

To get excellent rating, the player must pass 3 of 4 of these objectives:

When this mission is played in Bounty Hunter Mode, the challenge is to earn a combo of over $200. Successfully completing this objective rewards the player with Smitty as a playable character in Showdown Mode.

During the first wave of attackers following Gilbert and Dirk, four enemies will arrive in close proximity, providing a good opportunity to rack up a significant combo. 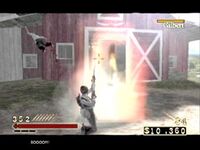 Retrieved from "https://reddead.fandom.com/wiki/Range_War?oldid=393238"
Community content is available under CC-BY-SA unless otherwise noted.