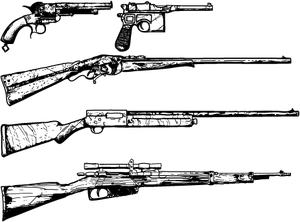 John Marston doesn't happen upon many of these weapons until very late in the game, but when acquired they can be invaluable, despite their often large price tags. They are found in Gunsmith stores around the map and only appear once the player has completed key missions in the story.

All five of these weapons can be purchased for a rather high price, although it may go up or down depending on Marston's honor and whether or not the Savvy Merchant Outfit is equipped. Obtaining one will award the player with the Exquisite Taste achievement/trophy, while getting all five Rare weapons contributes to 100% game completion.

Each weapon has their own distinctive properties among other similar weapons:

Players can get these guns at specific levels in multiplayer. Once they reach level 49, the player has unlocked all of the rare weapons.

Rare Weapons can also be obtained in Undead Nightmare, however they are not bought, they are found either through random events, missions or through completeing challenges.

These weapons can also help to achieve: