The rattlesnake is an animal encountered in Red Dead Redemption.

They are a common venomous snake renowned for the rattles on their tails, which alert nearby animals of their presence and agitation. They are found throughout the American West. Their natural habitat ranges from hot arid plains to cool mountain outcrops. Per Rockstar's poster (see image gallery, below), they can range from 3' 5" to 8' in length, and weigh up to 20 pounds.

Rattlesnakes can be hunted and skinned for snake skin that can later be sold to merchants for cash. In-game, they are very deadly. One bite will temporarily stagger the player, a second bite will bring their health dangerously low and can sometimes be fatal, and a third bite is generally fatal.

Rattlesnakes often blend in with their surroundings, and can be difficult to spot. If the player is on horseback near a rattlesnake, the horse will quickly pull up and whinny, giving the player some warning.

When approached on foot, rattlesnakes will start making hissing or rattling noises until the threat backs away. This can be used to effectively track one down and kill it.

The player needs to kill and skin eight rattlesnakes in order to get the Expert Hunter Outfit, which can be downloaded with the Hunting and Trading Outfits Pack.

Rockstar's description of the rattlesnake.

A rattlesnake being viewed through the scope of a sniper rifle. 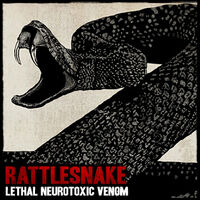 A rattlesnake lunges after Heath Michaels gets too close. 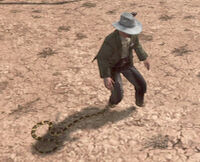 A rattlesnake nips at the heels of Heath Michaels.