Red Dead is a video game series developed and published by Rockstar Games, consisting of four standalone games (including a dedicated multiplayer title), one expansion pack, and associated downloadable content.

The series is influenced by both westerns and the realities of the 19th and early 20th century American West. Due to the time period in which the games are set, the horse, stagecoach, and train are the primary methods of transportation.

Gameplay varies between games in the series. The first game, Red Dead Revolver, follows a purely linear story line with fixed, limited locations. The second game, Red Dead Redemption, provides the player with an open world setting and more options for side missions and random exploration. The third game, Red Dead Redemption 2, builds upon mechanics introduced in its predecessor and introduces greater level of interaction with the game map and NPCs, while Red Dead Online is considered by Rockstar as the series' first ever dedicated multiplayer title.

All the games take place in the final years of the American Old West (1834-1920). The main titles are third-person shooters, but feature several key gameplay differences between them.

The franchise's trademark game mechanic is the Dead-Eye targeting system, which allows the player to aim at targets in slower motion on the battlefield and then attack with a flurry of bullets. The games also share similar themes and aesthetics of the Western genre of media. While the protagonists of Revolver and Redemption are unrelated, they share similar traits such as facial scars, hats, and strong devotion to their family.

The lead character of Red Dead Revolver, Red Harlow, appears to be an amalgamation of various Western Clint Eastwood-inspired characters from assorted movies, mainly the "Man with No Name" from the "Dollars" films and the titular character from the 1970s film "The Outlaw Josey Wales". Red Dead Revolver is a linear game, with most of the action driven by the story. The game also reproduces a "grainy film" effect and uses music that is highly influenced by the music of famous Spaghetti Western composer Ennio Morricone. Revolver was not a widely acclaimed success but received mostly positive reviews in its day.

Red Dead Redemption is not a direct sequel to Red Dead Revolver, instead it is a loosely-based spiritual successor to the previous title. Redemption boasts a broad, open game environment comprised of three unique territories representing different regions in the American Southwest and Northern Mexico. It features multiple other features aside from the main story campaign such as hunting, clearing gang hideouts, treasure hunting, and exploring.

Red Dead Redemption 2 serves as a prequel to the events depicted in Redemption, expanding on themes introduced in its predecessor, such as morality, redemption and the arrival of technology to the Old West. Redemption 2 explores backstories hinted in Redemption, primarily the downfall of the Van der Linde gang, a central element in the original Redemption game's lore. The game retains the same open-ended design its chronological sequel featured, but builds upon established mechanics and gameplay features to create a more immersive environment.

Combat and gunplay are an integral part in all three games. Players can take cover, blind-fire and free-aim. Different kinds of weapons are introduced across the games, mostly rifles and revolvers of the Western Era. Both Revolver and Redemption 2 feature weapon degeneration system, as well as upgrades to different firearms.

Red Dead Redemption makes use of a morality system where players have the ability to gain positive or negative "honor". Some of the ways to gain positive honor include taking an outlaw alive instead of killing him, or saving a kidnapped innocent. Negative honor can be gained for committing crimes including killing or robbing civilians. This works along with another system, "fame" showing and governing how people react based on Marston's honor. This concept returns in Redemption 2, which also slightly affects the outcome of the mission "Red Dead Redemption".

The Red Dead games all share similar western settings, aesthetics and atmosphere. However, each game possesses its unique landmarks, locations and settlements. The level of interaction with the setting differs between games.

Throughout its linear narrative and progression, Red Dead Revolver features a transitory setting; the limited interactions Red has with the environments include a small array of towns and mountains, some only appearing in cutscenes; prominent stages include Brimstone, a town frequented by protagonist Red Harlow. The game's events are implied to be set in the 1880s, while Rockstar Games writer and producer Dan Houser also stated that the game's events take place in its own canon.

Red Dead Redemption starts a new continuity separate from Revolver. Set in 1911, Redemption includes three regions for the players to explore in an open world environment: New Austin, considered to be the last wild territory in the United States; Nuevo Paraíso, the northern region in Mexico which serves as the stage for the Mexican Revolution; and West Elizabeth, a relatively technologically advanced region ruled by the American government.

Redemption includes an epilogue segment following the events of the mission "The Last Enemy That Shall Be Destroyed", which takes place in 1914. Aside from potentially different dialogues in Stranger side-missions, the territories of Redemption remain the same.

The Undead Nightmare expansion pack uses characters, concepts and aspects from Redemption, but presents a new continuity away from the core game. All three regions return in Undead Nightmare, but with slightly redesigned appearances due to the game's zombie apocalypse premise.

Red Dead Redemption 2 revisits the continuity established in the first Redemption, but takes place in 1899, twelve years before the first game's events. Similar to its predecessor, Redemption 2 is an open-world game that allows its players to explore the landscapes and settlements. Three new regions are introduced: Ambarino, a region located on the northern end of the game's map; New Hanover, a large region in the process of colonization; and Lemoyne, a warm region that includes the technologically advanced city of Saint Denis.

Guarma, a tropical island close to Cuba, serves as the setting for the game's fifth chapter, but is unavailable outside of associated story missions.

Similar to Redemption 1, Redemption 2 includes an epilogue segment following the completion of the story campaign. The epilogue takes place in 1907, and unlocks both West Elizabeth and New Austin for the player to explore. Both regions include familiar landmarks and places from their first appearance, but feature several changes due to the time gap. 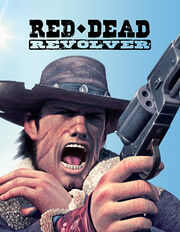 Red Dead Revolver is the first game of the series, it was released in 2004. It is a linear shooting-adventure gameplay that the player must progress through.

The story roles on Red Harlow, where his family is killed by Governor Griffon. After they are killed, Red became a bounty hunter and makes his way to find Griffon to avenge his family.

The game receives mixed to positive reviews. It received a 75% in GameRankings. 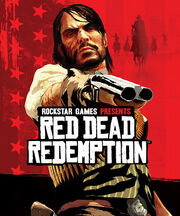 Red Dead Redemption is the second game in the series and was released in 2010. Unlike Revolver, the game is a free-roam style where the player can venture and interact with different kinds of things.

The game carries most of the gameplay of its predecessor like the Dead-Eye Targeting but adds more improvement to it, but with the same setting of the previous game.

The story takes place in 1911, where John Marston must find Bill Williamson and the rest of his former gang in order to have his family returned safety after being abducted by the Bureau of Investigation.

After its release, it gained universal acclaim from several gaming websites due to its engaging story and open world gameplay. So far, the game has a 95% in both GameRankings and Metacritic. A Game of the Year Edition containing all pre-order and multiplayer content plus Undead Nightmare was released in October 2011. As of February 2017, Red Dead Redemption has shipped over 15 million units.

The game carries most of the gameplay of Redemption but further adds even more improvement and refinements to it, but with the same setting of the previous game.

Set in the American frontier in 1899, the game follows the story of Arthur Morgan, a member of Dutch van der Linde's outlaw gang.

Much like Redemption, its release gained universal acclaim from several gaming websites due to its story, realistic gameplay and details within the world. So far, the game has a 97% Metacritic for both consoles. Currently, the game had the largest opening weekend in the history of entertainment, making over $725 million in revenue in three days, and over 17 million copies in total in two weeks, exceeding the lifetime sales of Red Dead Redemption.

Red Dead Online is the fourth game in the series and considered by Rockstar Games to be the series' dedicated multiplayer title. Players can create and customize characters and tailor abilities to suit play styles. Once ready, they can explore the world solo or with friends. Posses can be created with up to seven players.

Set before the events of Red Dead Redemption 2, the player assumes the role of an player-created silent protagonist, who was wrongly accused of murdering a man and sent to Sisika Penitentiary.

Access to Red Dead Online is free with every retail copy of Red Dead Redemption 2. However, it can be purchased separately. 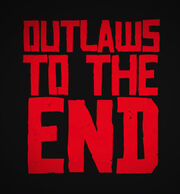 Outlaws to the End is a downloadable content of Redemption, released in June 22, 2010. It is a multiplayer DLC with six new missions to choose from, available in the Xbox Live Marketplace and the PSN Network for free.

The DLC is a multiplayer-based content with additional achievements/trophies, adding the Redemption achievements to 58.

Legends and Killers is a primarily multiplayer pack. The DLC also features 8 characters from Revolver, new multiplayer map locations and the Tomahawk, along with new single player challenges. It was released in August 10th.

Myths and Mavericks is a bonus pack which was released in September. The DLC contains new multiplayer locations and characters and in-demand modes in previous DLC. It is completely free of charge.

Undead Nightmare is a DLC that features zombie-themed gameplay. There is a new single player story, new multiplayer modes, animals, weapons and challenges. It was released on October 26th. It was also released as a stand-alone disk along with two other DLCs.

RDR: Gunslingers was released on Facebook prior to Redemption. It is a browser game where players duel against friends and strangers.

The gameplay is very basic; the players duel and the game calculates a battle with a random outcome based on a player class and any spent skill points. The game had achievements available and classes to choose.

Due to changes made to the Facebook platform, Rockstar removed the game in 2012.