Red Dead Online is a multiplayer-focused action-adventure video-game developed by Rockstar San Diego and published by Rockstar Games. It is the online multiplayer mode of Red Dead Redemption 2.

The Red Dead Online Beta was released on November 27, 2018 first for owners of the Ultimate Edition, and gradually opened for more players until November 30, 2018 with everyone gaining access. On May 14, 2019, with the release of a massive update, Red Dead Online came out of beta.

The beta for Red Dead Online launched in full on November 30, 2018. Early access prior to this rolled out incrementally as follows:

The Red Dead Online Beta was made available to all Red Dead Redemption 2 players on Friday, November 30 on PlayStation 4 and Xbox One. When booting up and arriving at the title menu, players will see an option in the top right of the screen to select Online.

Players can create and customize characters and tailor abilities to suit play styles. Once ready, they can explore the world solo or with friends. Posses can be created with up to seven players. Players have options similar to Red Dead Redemption 2, in that they can gather around the fire at camp, head out hunting or fishing, visit towns, battle enemy gangs and attack their hideouts, hunt for treasure, take on missions and interact with familiar characters from across the five states, fight against other outlaws in both spontaneous skirmishes and pitched set-piece battles, and compete with other players or whole Posses in open world challenges.

Camps are accommodations which players own. The camps can be customized with different themes, a flag, and equipment.[7] Players can choose from a selection of tents for their individual. Camps come in two sizes, small or large. Small camps can hold a posse of up to four while large camps can hold a posse of up to seven. When a posse is used, each player in the posse will share the leader's camp and their personal tents will appear in that camp. To customize their camp and tent, players can talk to Cripps.

There is also a lockbox that is always in the camp, allowing players to collect deliveries that they've purchased through the catalog.

Players can purchase a variety of tent styles. Depending on their tent, the player will have different bonuses when entering Free Roam, and when resting at Camp.

In multiplayer the player can choose between a multitude of mounts, all categorized into seven different categories. Players can own only five horse stalls, and therefore only five horses. When buying a horse, players are allowed to choose from one or more styles of the breed of their choice as well as the gender of their horse. Like single player, horses in Red Dead Online have statistics which vary between breeds and the different horses within each breed. Once purchased the player can name their horse, customize their appearance, add tack to it, and purchase Horse Insurance for $125.

These categories and their inclusive horse breeds are:

Certain mounts can also be unlocked after buying certain editions of the game, such as:

As players do activities in Red Dead Online they gain XP. This XP allows the player to reach certain XP milestones known as Ranks. With every Rank reached (within Ranks 1 to 100), the player will unlock new items such as clothing, weapons, horses, Camp modifications, and ability cards. 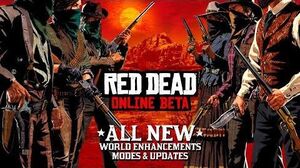 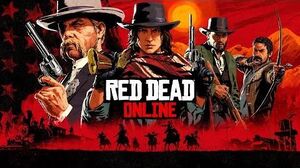 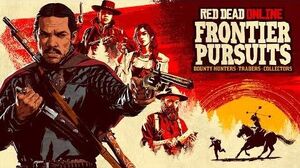 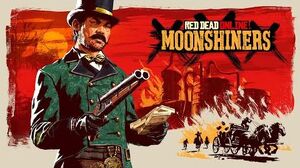 Retrieved from "https://reddead.fandom.com/wiki/Red_Dead_Online?oldid=399753"
Community content is available under CC-BY-SA unless otherwise noted.