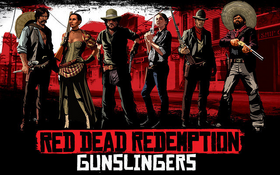 Gunslingers was a dueling game with RPG elements in which players compete one-on-one to gain experience points and achievements. It was only accessible by users eighteen years or older with a Facebook account. The original URL (no longer valid as of early 2012) was http://apps.facebook.com/reddeadredemption.

When a player challenges another player, the game calculates the battle with a semi-random outcome, influenced by player class and any spent skill points. Even the weakest player can win against the strongest, but the chances are very slim.

Leveling up will grant the player extra skill points to spend as the player wishes. More skill points will be earned when at a higher level. Experience points can be spent in the following categories:

Players can gain bonus skill points in Shootouts, and by linking a Rockstar Social Club account to the Gunslingers account, as well as by registering a copy of Red Dead Redemption with Social Club.

Spending too many points in the stamina stat (which does not affect the power of the character) will make the character significantly weaker than other characters of the same, or even of a lower level.

A duel costs 20 stamina. This amount is absolute.

There were two available modes of fighting in this game.

There were three available character classes: