Red Dead Redemption: The Man from Blackwater is a 2010 short film produced by Rockstar Games and based on the western action-adventure game Red Dead Redemption. It was directed by John Hillcoat and edited by Barry Alexander Brown, using cutscenes and gameplay footage from the game.

The Man from Blackwater was made entirely from the game engine of Red Dead Redemption. The majority of the film's scenes are lifted from the game, including several cutscenes that were recorded from alternate angles or with modified dialogues.

The rest of the short movie features shots of Marston walking, riding on horseback, and camping across the various landscapes that can be visited in Redemption.

The Man from Blackwater's running time is 29 minutes.

The majority of the events depicted in The Man from Blackwater are taken from the game's first act, set in New Austin, 1911. John Marston, a former outlaw, is sent by the Bureau of Investigation - a precursor to the modern-day FBI - to capture his former brother in-arms, notorious criminal Bill Williamson. Throughout his adventures in New Austin, Marston allies himself with several figures.

Minor characters such the Stranger character Jenny, duelist Aquila and Seth's partner Moses Forth also make an appearance, so do background NPCs and bounty targets such as Charlie Mash.

Scenes depicted in the feature include: 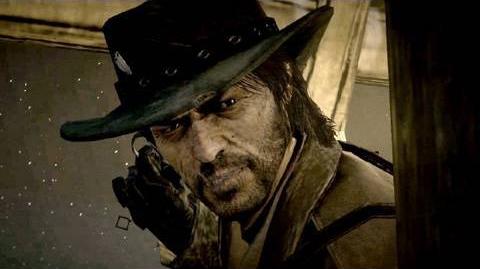