Red Sage is one of the most difficult plants to find, due to how well it blends in with the terrain.

Red Sage looks similar to grass, with the fluffy dark red flower heads surrounded by dark green leaves. It is ankle height but spreads quite far across the ground, and blends in very well with the grassy areas of Rio Bravo where it is found.

Red Sage can be recognized by its long stem, red flowers and lefty base. This plant can be spotted among the grass and forests in its native habitat of Rio Bravo, New Austin. This plant will replenish your Stamina Core if consumed, or when crafted into Bitters.[1]

Purplish-red leaves, popular with women of a certain age.[2]

Red Sage is found in and around the Río Bravo area of the New Austin territory, close to Fort Mercer. The largest concentration is found to the north of Fort Mercer, near the small paths heading down to Mercer Station and Riley's Charge. Red Sage can also be found in smaller numbers near Benedict Point, in the west side of Rio Bravo.

Red Sage near the train tracks in Cholla Springs 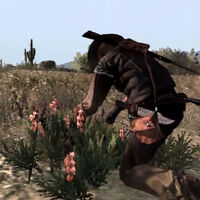 Gathering plants and flowers contributes toward the following Trophies/Achievements:

Retrieved from "https://reddead.fandom.com/wiki/Red_Sage?oldid=412591"
Community content is available under CC-BY-SA unless otherwise noted.