The Reinforced Lasso is an item featured in Red Dead Online.

A lasso made with reinforced rope to keep bounty targets (and players) secure.  Unlike the regular Lasso, the Reinforced Lasso is knife-proof, meaning that players being dragged by it will be unable to use their knife to cut themselves free. It also takes significantly longer to break free from than the standard Lasso, and longer to free other players from, as the rescuer will need to untie them by hand instead of cutting the victim from the rope.

The Reinforced Lasso can be bought from any gunsmiths at the price of one Role Token and $350.00 after reaching Bounty Hunter rank 1. 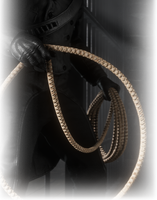 Ad shown in the Wheeler Rawson and Co. Catalogue