“This is a fine weapon.”

The Repeater Carbine is a weapon featured in Red Dead Redemption.

The Repeater Carbine is a short-barreled, repeating rifle. It is a very useful weapon when pursuing bounty targets that are needed to turn in alive. A single round in the chest or abdomen area can severely wound most enemies.

This weapon has the least damage per shot of any gun other than the Cattleman Revolver. In multiplayer, it takes five shots in the torso to kill another player, so headshots are vital to survive a shootout.

This weapon is very good for hunting smaller animals, such as rabbits or raccoons, and some larger animals, such as deer or buck. However, the Repeater Carbine is easily bested in general effectiveness, both in hunting and combat, once the player obtains the Winchester Repeater, as it has better damage, range, and ammo capacity.

Due to this gun's low power, it is good for hurting or immobilizing an enemy when the player does not want the enemy to be killed. 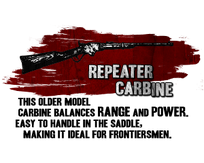 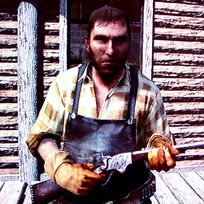 Charlie Bengle wielding a Repeater Carbine.
Add a photo to this gallery

The Repeater Carbine can be used to unlock the following Trophies/Achievements:

Retrieved from "https://reddead.fandom.com/wiki/Repeater_Carbine?oldid=369285"
Community content is available under CC-BY-SA unless otherwise noted.