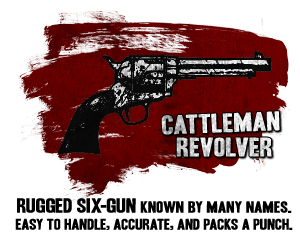 Revolvers are a weapon class in the Red Dead series.

In Red Dead Revolver all the sidearms are revolvers.

In Red Dead Redemption the revolvers share the top slot of the weapon wheel alongside pistols.

Revolvers are reasonably powerful, delivering damage comparable with that of rifles and shotguns, although with a shorter effective range. Revolvers use revolver ammunition.

Revolvers are the most common type of weapon in the game, being found everywhere, although they are slightly less popular in West Elizabeth because of the easy availability of newer pistols. Revolvers are typically carried by bandits, and are the first kind of firearm available to the player.

Red Dead Redemption II features the ability to dual-wield revolvers, using the off-hand holster as the carrier for the second gun. Once purchasing two guns, the first gun is labeled with a clubs symbol in the weapon selection. The latter is labeled with a diamond.

Retrieved from "https://reddead.fandom.com/wiki/Revolvers?oldid=385852"
Community content is available under CC-BY-SA unless otherwise noted.