Disguised as an Reyes' Rebels

The Reyes' Rebels Outfit is an outfit in Red Dead Redemption worn by Marston.

The Reyes' Rebels outfit consists of an intact poncho, a dark red headband, and very worn shoes. It appears to be worn over Marston's Cowboy outfit, even while playing as Jack Marston in the game's epilogue. It is one of the three outfits unlockable in Nuevo Paraíso, alongside the Mexican Poncho and the Bandito outfit.

This outfit disguises the player as one of Abraham Reyes' Rebels, who become Nuevo Paraíso's law enforcement organization following the mission "An Appointed Time", after which this outfit can be obtained. As such, the player will not be pursued by law enforcers, posses, and bounty hunters while in Mexico if they wear this outfit.

This outfit effectively works as a Mexican counterpart to the U.S. Marshal outfit.

Reyes' Rebels outfit can be acquired by completing the following requirements:

† = Note: Scrap is not available to be purchased until the player has completed the Abraham Reyes mission "An Appointed Time".

Alternatively, the player can enable the cheat code "Gang chic", which unlocks this outfit alongside the Walton's Gang, Bollard Twins, Bandito and Treasure Hunter outfits. However, enabling this cheat code will disallow the player to save. 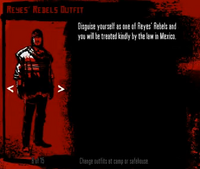 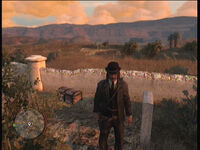 The location of the chest in Sepulcro, where the player will find a scrap.

Obtaining the Reyes' Rebels Outfit contributes toward acquisition of the following Achievement/Trophy: