The Rolling Block Rifle in multiplayer is easy to use, but hard to master, due to its very low ROF and ammo capacity. Since the weapon has a very high effective range, players need to take cover if the other player has a similar rifle, since other weapons do not have such high range. With this weapon, it is very easy to take down enemies behind low cover, or taking out enemies that are taking cover if in an elevated position. When scoped in the ring of the scope will light up when a enemy is in the scope, even if you cant quite see the enemy you will get a general idea of where he is, even if he is behind a object like a rock or wall. 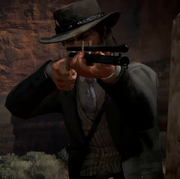 A gold Rolling Block Rifle
Add a photo to this gallery

Retrieved from "https://reddead.fandom.com/wiki/Rolling_Block_Rifle?oldid=255670"
Community content is available under CC-BY-SA unless otherwise noted.