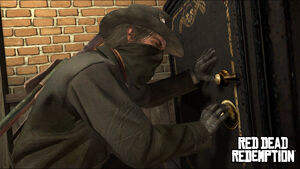 Safe cracking is an activity in Red Dead Redemption.

Certain safes found within the game are able to be cracked by the player. When in front of such a safe, the player will be prompted to press a button to begin the cracking attempt. Doing so initiates the safe cracking mini game.

The player must start by setting the dial to zero. From there, they must rotate it to the right until the controller vibrates and then stop. An on-screen cue of a lock opening will signify that the first number has been found. The player must then rotate the dial to the left and right again, stopping each time the controller vibrates. If the player makes an error, they must begin again from the start. If all three numbers are reached successfully, the safe opens and the contents are provided to the player. Normal safes contain three money saches, a Cattleman Revolver and, rarely a Pardon Letter.

Cracking a safe results in a loss of honor for the player, unless the bandana is worn. If the player is already wanted by the law, they will be unable to crack a safe until losing their wanted level. Players should keep this in mind if they are planning on robbing a bank, because lawmen will be everywhere.

Safes usually contain up to 500 dollars, so they can be quite useful for getting rich quick. On rare occasions a Pardon Letter can be found inside. Safes are re-crackable. This means players can go back and profit from them as many times as they want, but only after leaving the area and travelling a certain distance between each safe crack. Otherwise, the safe will still be empty upon return.

This is a list of safes that can be cracked. There are other safes not listed here that are merely background and can not be cracked. A video showing the locations of all the safes can be found here.

Safe cracking is not available as a general activity in multiplayer. Several Stronghold maps do feature safe cracking as one of the stages (the safes yield the Explosive Rifle), but this is done with a simple button press and does not utilize the safe cracking mini game.

Retrieved from "https://reddead.fandom.com/wiki/Safe_cracking?oldid=328132"
Community content is available under CC-BY-SA unless otherwise noted.