It is the largest city in Red Dead Redemption 2, and also the largest settlement in the entire Red Dead series.

The Cornwall City Rail Company and later; in 1907, the Pacific Union Railroad Company operate the Saint Denis Trolley Services that covers the majority of the city, operating two lines. The Blue Loop is the longest trolley line in Saint Denis, stopping at 8 stations covering the commercial district and old quarter. Stopping at popular destinations such as a the Lemoyne Supreme Court, Market district and the Port of Saint Denis. The Blue Loop provides a train interchange at the Victoria Street Station. The much smaller Red Loop, circles around Harris Square in the northwestern part of the city where the more affluent residents reside.

The Southern and Eastern Railway, its successor; the Pacific Union Railroad, and the Central Union Railroad both frequent the Saint Denis railway station situated opposite the Victoria Street trolley station. The railway line continues along the southern and eastern edge of Saint Denis traveling north to the state of New Hanover. The city also acts as an important freight hub, with the Port of Saint Denis situated alongside the railway station, as well as warehouses and a freight station servicing the railroads. 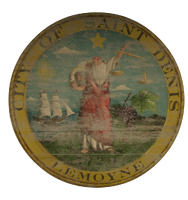 Retrieved from "https://reddead.fandom.com/wiki/Saint_Denis?oldid=394510"
Community content is available under CC-BY-SA unless otherwise noted.