The police officers within the department wear a uniform, consisting of a blue coat with black trousers and white gloves. They also wear either black custodian helmets or peaked hats, and are armed with sidearms and longarms. They will arrest or kill the player for committing a crime and alert other officers to where the player is located. Some officers are seen using horses to patrol.

Officers can be found standing guard at public places such as the church and parks. Officers can also be found patrolling the city.

The police are known to use better weapons than other lawmen and gang members, such as the Semi-Automatic Pistol and the Mauser Pistol, along with various other contemporary weapons. They also use whistles when chasing the player to alert nearby civilians to leave the area. 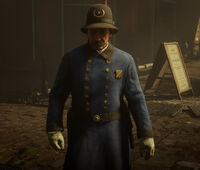 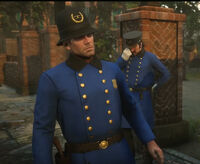