After the player completes the mission "Bar Fight" with an excellent rating, Sam becomes available as a playable character in Showdown Mode. He can also be unlocked after buying the Beard Comb. His special abilities include charging like a bull, picking up an opponent and throwing them and throw barrels.

Sam is the older brother of Daniel aka Dan. Sam is large and very strong. He, alongside his brother, are feared criminals in Brimstone, and often hang out in the town's saloon. Sam has a bounty of $400.

Sam is first mentioned in the mission "Range War", having left a notice that the Governor Griffon made him a "better offer" to roust Annie Stoakes from her ranch and burn it to the ground. However, he does not participate in the attack on her ranch.

Sam is only seen in the mission "Bar Fight", serving as the final boss of the level. After the fight in the bar with some of Sam's men and other drunkards, Red Harlow steps into the theatre where he kills Sam's brother, Dan, in front of him. Sam tries to avenge him instantly. He is subsequently killed by Red.

Sam can use the same methods of attacking Red as he does in Showdown.

He is listed in Sheriff Bartlett's Journal under the Wanted - Dead or Alive section. His pages are unlocked the same way his character model is unlocked.

Another view of Sam's wanted poster. 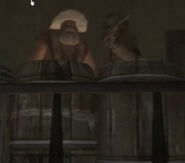 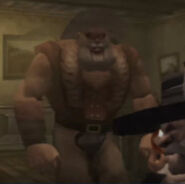 Sam approaches.
Add a photo to this gallery

Retrieved from "https://reddead.fandom.com/wiki/Sam?oldid=398533"
Community content is available under CC-BY-SA unless otherwise noted.