Town of Tumbleweed in Gaptooth Ridge, State of New Austin

Sheriff Samuel "Sam" Freeman[1] is a minor character featured in Red Dead Redemption 2 and a stranger in Red Dead Online.

Sheriff Sam Freeman is the somewhat draconian sheriff of Tumbleweed, well-known for his ruthlessness in upholding law and order within the settlement.

The protagonist first encounters Sheriff Freeman at the Tumbleweed Jail, when Terrence O'Dowd pleads with him to mount a rescue for his wife, who was supposedly kidnapped by a gang of outlaws operating out of Twin Rocks. Explaining that the lacks the manpower to do so and that the area is far out of his jurisdiction, Freeman subsequently refers him to the protagonist and their posse, whom O'Dowd convinces to help.

If the player has chosen to remain honorable, they will later join Old Man Jones in attempting to rescue both Sheriff Freeman and Marshal Tom Davies after the Del Lobo Gang attacked Tumbleweed and captured the two in retaliation for Alfredo Montez's death. When the protagonist and their posse arrive, Freeman is shown tied at the gallows and is shocked when Davies is hung before his eyes. However, he and the Marshal are subsequently cut loose and choose to flee the town by wagon to draw the remaining Del Lobos away. After reaching The Scratching Post, Freeman thanks the protagonists and returns to Tumbleweed.

Sheriff Freeman can also offer recovery and escort missions to the player, which will increase their honor. If the protagonist becomes a bounty hunter, they can deliver him various bounty targets in exchange for the price on their head. Freeman will make a comment depending on whether the criminals are alive or dead.

When the player visits Tumbleweed for the first time, they see a deputy bringing in a member of the Del Lobos. After a brief interrogation, Sheriff Freeman executes the criminal on the spot.

After this, the player can perform bounty hunting missions to capture Joaquín Arroyo and later Esteban Cortez, both of which are from the Del Lobo Gang. After the apprehension of both of them, Freeman says that he will no longer post any bounties because he would instead like to deal with crime by himself, citing that a Sheriff has to "earn" their authority.

Outside of missions, Sheriff Freeman can often be found standing in the center of the settlement, preaching to the townsfolk about law and order in the community, or in his office, where he will warn the player to leave if they stay for too long.

Sam Freeman is shown to be exceptionally harsh, unforgiving, and obsessive. Despite being respected for his competence in dealing with crime in the region, he also has a reputation for being overly intolerant of any wrongdoing, to the point of being tyrannical. He notably kills a Del Lobo without any trial, exemplifying his attitude.

However, Freeman can also be seen as quite honorable, not viewing himself as being above the townsfolk and even admitting that it’s his job to earn his authority, and that he is not above that. Additionally, Freeman is not an unpopular figure in the town, suggesting that the townsfolk like him and admire his tough stance on crime and his effectiveness in dealing with it. 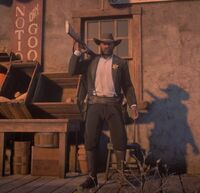 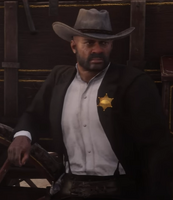