Sampson Black is a minor character and a stranger featured in Red Dead Redemption 2.

Sampson Black and Wendell White were attacked by a farmer named Jimmy Holdacre and fought back in self defense. This resulted in Jimmy dying from a heart attack.

In court, Judge Amory was bribed and sentenced both of them to prison on murder charges. The duo managed to escape from prison and camped out near Rhodes. This is where the player encounters them in the mission "The Ties That Bind Us".

The player meets them camping near Rhodes. They ask for his help, requesting he remove their wanted posters. From there the player can hand in the men or do as they wish.

If the player decides to arrest them: Refusing to burn the posters, the player hogties them and takes them both to the Rhodes Sheriff office. The protagonist is then given a reward for the pair and neither of them are seen again.

If the player decides to remove the posters: The protagonist accepts their request. After being taken down, the posters are burnt in the player's campfire.

They are next encountered in northern Lemoyne and have set up camp near Old Greenbank Mill. The two men are seen lying beside each other, moaning in pain. They explain to the protagonist they ate mushrooms and now feel very ill, and ask for medicine to cure them. The player returns to them and gives them their requested medication, to which they are thankful. They consume the cure and, after expressing how strong it is, state that they feel better immediately. Afterwards, the protagonist suggests that the two split up.

In their final encounter, the two are found living together at Stilt Shack. They greet the player, who is surprised that the men stayed together. The duo then get into an argument and Sampson insults Wendell, so Wendell gets angry and goes back inside the cabin. Sampson then realizes that he had offended Wendell and apologies for insulting him, after which Wendell accepts his apology and opens the door. 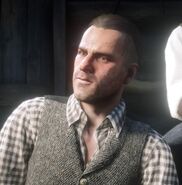