Samson Finch is a seasoned outlaw who formerly served in the United States Army. At some point before 1898, he befriended a disreputable regiment commander. The two along with other soldiers within their unit plotted several heists in the regions of New Hanover and Lemoyne. After a year of planning to rob the Lemoyne National Bank, however, his once-reliable partner and fellow soldiers eventually betrayed him and set out to conduct the robberies themselves.

If the player finished the honor choice mission strand while maintaining low honor, Horley will refer them to seek work by assisting Samson Finch.

Finch is first met at a cabin near Dewberry Creek. Horley, who is already present with him, formally introduces him to the protagonist and their posse. Finch explains to them how he was betrayed by his former partner and talks about the bank robbery he is planning. But first, he has another job planned: raiding Cornwall Kerosene & Tar and robbing a group of wealthy industrialists. After Horley leaves, Finch takes the protagonists to the train tracks while explaining that the best way to infiltrate the refinery is by hijacking a train that is headed there, although a shootout with the guards is still inevitable. Finch then heads over to Valentine so that he would not be suspected of being involved in the robbery, and leaves the protagonists to carry out the heist on their own.

Following the successful robbery, Finch believes that the protagonists have proved themselves to him, and asks them to meet him near Fort Wallace for another job. There, he explains that his former partner and unit are stationed inside and have access to an ammunition stockpile, which they intend to use to carry out their own robberies. Finch asks the protagonist to kill all the soldiers and destroy their ammunition. Choosing not to get involved again, as the soldiers will most likely recognize him and open fire on sight, he awaits them at his camp to observe. Before they proceed, Old Man Jones arrives to deliver a message from Horley to the protagonists, and briefly criticizes Finch's belief that every bad action deserves to be punished, prompting Finch to insult him. After the protagonists return from killing the soldiers and destroying the ammunition, Finch thanks and pays them, and departs after waving off Old Man Jones' verbal comments once more.

Sometime later, Finch decides to finally put his plan to rob the Lemoyne National Bank into motion, and instructs the protagonists to hijack a carriage passing through Great Plains containing some Express Company uniforms and an armored coach located in Strawberry. After the protagonists return with these items, Finch tells them to meet him in Saint Denis for the robbery.

The protagonists meet up with Finch and change into the stolen uniforms, before going to the bank, while Finch waits for them in the nearby cemetery. The protagonists gain access to the vault without any suspicion, subdue the bank manager, and steal the bearer bonds stored inside the vault and the manager's office. Pursued by the local authorities, they reunite with Finch and try to escape through the cemetery. After losing the pursuing lawmen, they manage to board a train that is departing from Saint Denis. Finch then reaches for his revolver and jokingly pretends to be betraying the protagonists. While sharing a drink with them, he tells the protagonists to stick to their code and that he will kill anyone who doesn't, before departing with his share of the money.

Samson Finch is an honest individual. He doesn't try to hide his true nature and is fully aware that he is a bad person, who did some less than moral things in his life. He also respects his associates, as long as they are loyal and competent. When first introduced to the protagonist, he lets them know from the very beginning about the dangers of the jobs he wants them to pull off for him, but assures them that, if they perform well, there should be no complications, and that they will receive a fair share of the profit. He also congratulates and gives them credit where it is due after they prove themselves to him.

However, Finch can also be very vengeful, as he wants to see anyone who wronged him punished. Despite this, he knows how to prioritize his goals, and believes that making money is more important than getting revenge. He also doesn't believe in concepts of honor and redemption and calls Old Man Jones a "pathetic old man" when he criticizes his belief that every bad action deserves to be punished.

Finch is very careful when it comes to planning his jobs, having spent an entire year to plan just one bank robbery. He analyzes the best ways to carry out each heist and wants to make sure that he gains the maximum profit every time. He also has somewhat of a dark sense of humor, as he jokingly pretended to betray the protagonists after their robbery of the Lemoyne National Bank was pulled off successfully. 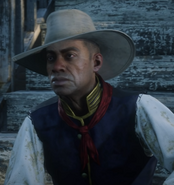