View source
“We eat berries and mushrooms, you fool. Or we did. Now none of us left. Some maniac's been murdering us. I'm the last one of my kind. We've lived in these hills for a thousand years... My family is gone. My kind is gone...”

–The last Sasquatch to John Marston.

Sasquatch have been described in reports as large, hairy, ape-like creatures, ranging from 6–10 feet (2–3 m) tall, weighing in excess of 500 pounds (230 kg), and covered in dark brown or dark reddish hair. Alleged witnesses have described large eyes, a pronounced brow ridge, and a large, low-set forehead; the top of the head has been described as rounded and crested, similar to the sagittal crest of the male gorilla. Sasquatch is commonly reported to have a strong, unpleasant smell by those who claim to have encountered it.

In Undead Nightmare, they come in both reddish-brown and dark brown colored fur and have an appearance and characteristics similar to a gorilla. The darker colored ones are assumed to be male (as seen in The Birth of the Conservation Movement), while the reddish brown ones are assumed to be female. They are intelligent and are able to speak English fluently. According to Rockstar's game art and a crazy man in the wilderness, they prey on human infants and are "Extremely dangerous and should not be approached". However, they actually eat mushrooms and berries and have been living in the forests of Tall Trees for over one thousand years according to the "last" sasquatch. Despite their appearance, they are very similar to humans in their reactions and feelings.

They are always found in and around Tall Trees, regardless if the player kills the supposed "last" one. The in-game Sasquatch are timid and apt to run from the player if threatened in any way. They claim to have been living in Tall Trees for over a thousand years, but they cannot be found in the normal campaign.

In the stranger mission "Birth of the Conservation Movement", the player is tasked by a man wearing clothing similar to the Expert Hunter Outfit to kill the Sasquatch around Tall Trees. When the last specimen is found, he'll tell a moving story about being the last of his kind and how he wishes to be killed. After the cut scene, the quest is complete. However, the player can choose to leave him be or to end his life. If you choose to kill him, sometimes headshots don't kill instantly. So far, this has only happened with the one that tells the story and wants the player to shoot him. This decision will not affect the storyline or the rest of the game. Whether the player decides to eliminate the final Sasquatch or not, the player will occasionally find Sasquatch within Tall Trees.

Eating habits of the Sasquatch.

Hunting Sasquatch through the night scope.

Eating habits of a Sasquatch. 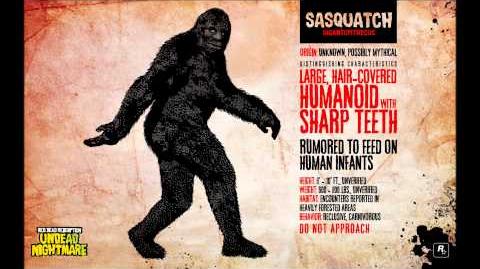 Hunting and killing a Sasquatch will contribute to the acquisition of the following Trophies/Achievements: