Savagery Unleashed is a mission in Red Dead Redemption 2.

In order to secure safe passage off the island, Arthur has agreed to rescue some local workers for Hercule and Leon.

Arthur comes across a hanged person and a dart hits his neck. Arthur realizes that something hit him and he collapses to the ground. Arthur wakes up tied to a chair and his captor takes off a bag off his head. The man punches Arthur to wake him up. He asks Arthur for his name and what is he doing here. Arthur then gives his captor an alias. His captor is satisfied with his answer and Arthur sees Leon and Baptiste tied up. The captor then interrogates him about Arthur and Leon lies to the man that he does not know Arthur. The captor then punches Leon in the face. The captor heads over to Baptiste and kicks him. Arthur attempts to escape from his chair and manages to break the chair. The man is surprised and pulls out his knife. Arthur tackles the man to ground and knocks him out. Arthur takes the man's knife and frees the others. Baptiste tells Arthur that he believes that there is still time to save the workers and hands Arthur a rifle. Leon states that he heard some voices down in the ruins and asks Arthur to come with him to check it out. Baptiste is seen struggling to get up and Leon tells Baptiste to rest due to his beatings from the captor. 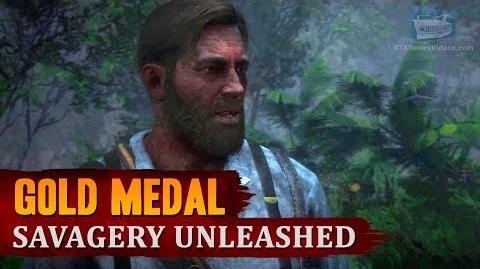 Retrieved from "https://reddead.fandom.com/wiki/Savagery_Unleashed?oldid=401800"
Community content is available under CC-BY-SA unless otherwise noted.