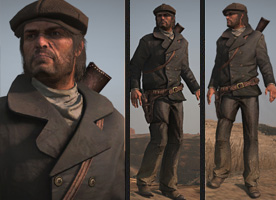 The Savvy Merchant is an outfit featured in Red Dead Redemption.

The Savvy Merchant outfit dresses Marston in a navy blue pea coat with a pair of black pants similar to those worn with the Elegant Suit. Marston's cowboy hat is replaced with a taupe beret.

The outfit decreases item costs found in gunsmith stores by half the original price. The discount also stacks with the high honor discount as well as any other discounts bonuses found in the game. The outfit's bonuses don't influence the value of the items the player themselves sells, nor does it effect any other shop aside from gunsmiths.

Before the release of Red Dead Redemption, the Savvy Merchant outfit was one of three outfits proposed by Rockstar Games to be included as a pre-order bonus at GameStop, but it was beaten by the Deadly Assassin Outfit. As such it was originally unobtainable in the game.

The Savvy Merchant outfit's discovery is only unlocked by downloading the free Hunting and Trading Outfits DLC for Red Dead Redemption, which adds the quests for both this outfit and the Expert Hunter Outfit. The DLC is also included in copies for the game's Game of the Year edition.

Five scraps must be obtained by completing challenges before the outfit will be unlocked. The scraps can be obtained in any order.

Usage of the outfit

The Savvy Merchant outfit appearing in a trailer depicting the pre-order outfits.

Marston dueling, wearing the outfit.
Add a photo to this gallery

Retrieved from "https://reddead.fandom.com/wiki/Savvy_Merchant_Outfit?oldid=371190"
Community content is available under CC-BY-SA unless otherwise noted.