Settlement of Rhodes in Scarlett Meadows, State of Lemoyne

Scott is a member of the wealthy Gray family, and can usually be seen accompanied by his brother, Iain. Despite being related to Beau, both Scott and Iain appear to have a feud with him.

Scott and Iain can be seen at the women suffrage rally at Rhodes, where they can be seen interrupting the march and telling the women to leave. They also begin threatening Beau and asking him what he’s doing there, but Arthur intervenes and takes him to safety. If Arthur continues walking, he'll leave with Beau without having to talk Scott and Iain down, but if he slows down, he'll be confronted by the duo. Arthur can defuse the two off, or antagonize them and get into a small fight, knocking the two unconscious.

They will next be encountered when the two of them spot Beau and Penelope trying to board a train in Rhodes, in order to run away together. The two try to stop Beau before Arthur steps in and knocks both of them unconscious in a fight. 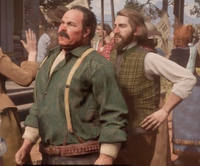 Scott (left) and Iain (right) at a rally in Rhodes