Red Dead Wiki
Register
Don't have an account?
Sign In
Advertisement
in: Characters in Redemption 2, Characters in Online, Shopkeepers
English

Settlement of Emerald Ranch in The Heartlands,
State of New Hanover

Seamus is a foreman at Emerald Ranch and tends the rackets there. He specializes in stolen wagons but runs a general fence on the side as well.

Seamus can be encountered tending his valuables fence.

Hosea Matthews introduces Seamus to Arthur as a new prospective business partner. Seamus states that he does not like working with amateurs. Hosea suggests a chance to prove to Seamus that the pair are skilled, and not amateurs. He tells Hosea that he will only do business with the gang if they carry out a job for him; stealing a stagecoach purchased by his cousin-in-law.

He also makes an appearance in a stagecoach robbery, which was a tip provided by Alden Carruthers. After stealing a stagecoach, the player must take it to Seamus for payment.

Later on, he can briefly be seen while entering Emerald Ranch at the beginning of "He's British, of Course IV". 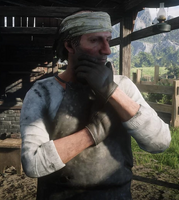 Seamus without his table

Seamus inviting the player to bring the wagon inside his fence