The Semi-auto Shotgun is a weapon featured in Red Dead Redemption.

The weapon is relatively inaccurate, but it is still a powerful and efficient weapon in its own right. It is one of 5 Rare Weapons in the game that must be acquired to achieve 100% Completion. 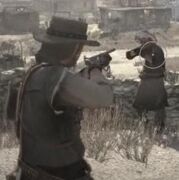 Marston aiming the shotgun to an attacker.

Semi-Auto Justice
Add a photo to this gallery

The Semi-auto Shotgun can be used to unlock the following achievements.

Retrieved from "https://reddead.fandom.com/wiki/Semi-auto_Shotgun?oldid=196095"
Community content is available under CC-BY-SA unless otherwise noted.